Dissipation and irreversibility in a solvable classical open system★

Electron in a dc field interacting with LO/LA phonons

The classical model of an electron in a dc electric field interacting with longitudinal acoustical (LA)/optical (LO) phonons (with an infinite number of degrees of freedom) is discussed. We show the irreversible (dissipative) asymptotic behavior of the electron (finite subsystem) as an open classical system, although the whole system is time-reversal invariant. The problem is solvable numerically without other approximations, or limits. Below a certain critical electric field (and below a critical initial velocity) an asymptotic motion of the electron with a constant velocity emerges, while above the critical field it is the usual accelerated motion. In the absence of the field, the state of vanishing velocity is stable in its vicinity in the LA case, while in the LO case it might also be a steady oscillatory motion. The field-dependence of the asymptotic velocity is linear in the LA case, while it is highly non-linear for LO.

Contribution to the Topical Issue “Non-Linear and Complex Dynamics in Semiconductors and Related Materials”, edited by Kathy Lüdge. 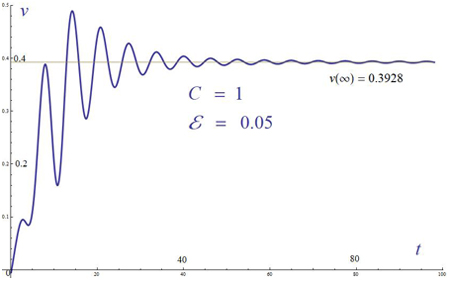