In this paper, we study the electronic properties of carbon nanocones with one and two nappes, with pentagonal and heptagonal defects in their lattices. We use the continuum model, which is based on a Dirac-like Hamiltonian with the topological defects described by localized non-Abelian gauge field fluxes. We develop a geometrical approach that can describe the two nappes of the double cone surface simultaneously, by extending the radial coordinate to the complete set of real numbers. We show that, for some combinations of different nanocones, forming the double conical surface, the local density of states near the apex of the cone does not vanish at the Fermi energy and presents a strong dependence on the angular momentum. We also obtain the energy spectrum for finite-sized nanocones and verify that it depends on the choice of topological defect on the surface, which suggests that a double nanocone can be used to control the electronic transport in carbon-based electronic devices. Furthermore, we study the effects of an uniform magnetic field parallel to the cone axis on its electronic states. The Landau Levels are analytically obtained and a detailed analysis of the energy spectrum is done considering combinations of the relevant quantum numbers. We find highly degenerated energy modes, as in the planar case, and apical states dependent on the geometric parameters of the surface. 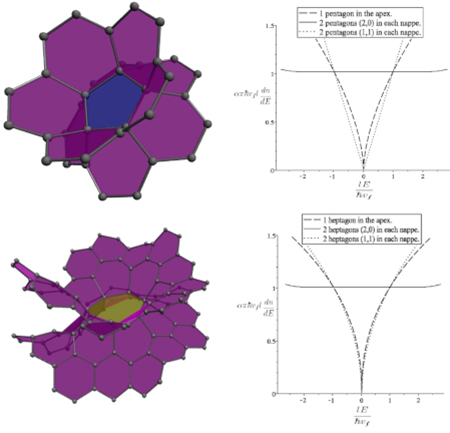