In a recent work, it was shown that sinusoidal signals are amplified in an array of unidirectionnally coupled MEMS and when the number of MEMS units was large enough, an instability leading to chaotic behavior was observed [M.V. Tchakui et al., Eur. Phys. J. B 89, 22 (2016)]. In this work, we explore the role of disorder in natural frequencies on the propagation and amplification of a signal in such an array. Considering a random Gaussian distribution of natural frequencies, it is found that for small disorder strength, the propagation takes place leading to oscillations in the array. Along the network, a decrease of oscillations amplitude is observed in proportion as the disorder strength grows up. With large coupling strength, the second transition to chaotic behavior is further postponed to a large MEMS rank up to its disappearance as the disorder strength increases in a broaden frequency range. For very large disorder strength the signal amplitude is damped to zero and there appears oscillations death. 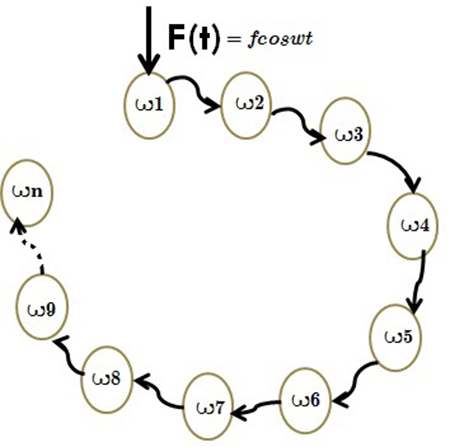