Structural and electronic properties of selenium (Sen; n = 8–31, 35 and 40) and tellurium clusters (Ten; n = 6–24, 30 and 32) have been investigated within the framework of density functional formalism. Genetic algorithm based code USPEX and molecular dynamics have been used to obtain at least 70 distinct equilibrium geometries for each cluster. Strikingly, all the ground state geometries as well as a few low energy structures are ring like, closed one dimensional structures. Despite the fact that the small clusters of these elements tend to have one dimensional geometries, it is unusual to have such stable ring geometries for large clusters of the order of 40 atoms. Our work brings out a very interesting trend of order–disorder–order transitions in the growth pattern of these clusters. Although, the size of the ring increases with an increase in number of atoms, the variation in the bond angles and bond lengths is rather small. Remarkably, binding energy per atom is almost constant. The nature of bonding has been analyzed by examining individual charge densities of all the molecular orbitals. It turns out that the amount of buckling and the angle between three adjacent atoms involved along the ring plays a crucial role in forming covalent bonds in a variety of ways. The pattern of Eigenvalues of all the clusters show a very interesting character. The “bands” are formed out of almost pure atomic orbitals with negligible hybridization between s and p. The lowest n energy levels show text book like tight binding character having constant width. The manifold of p bands is separated from s band by a large gap, a consequence of large separation between atomic s and p levels. Unlike the case of infinite helix we find that all the character of the occupied p bands show all the three components, px, py and pz. Further, non bonding orbitals are found to lie below the HOMO level. 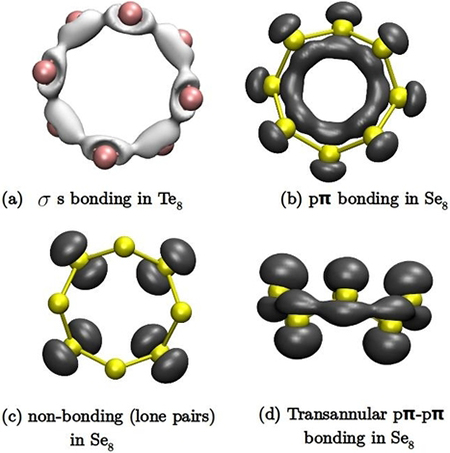