We have derived the stochastic model of plasma-condensate systems by taking into account anisotropy in transference of adatoms between neighbor layers and fluctuations of adsorbate flux. In the framework of stability analysis we have found that an increase in the fluctuation’s intensity leads to the homogenization of the adsorbate distribution in the system. By using numerical simulations we have shown, that by varying the fluctuation’s intensity one can control both dynamics of pattern formation in the system and morphology of the growing surface. It is found that with the noise intensity growth one gets morphological transformation from separated adsorbate islands on the substrate towards separated holes inside adsorbate matrix. It is shown that the introduced fluctuations lead to anomalous dynamics of the mean size of adsorbate islands growth. Statistical properties of the adsorbate/vacancy islands were studied in detail. 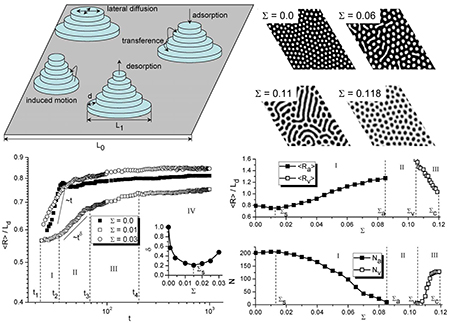