The strategies adopted by individuals to select relevant information to pass on are central to understanding problem solving by groups. Here we use agent-based simulations to revisit a cooperative problem-solving scenario where the task is to find the common card in decks distributed to the group members. The agents can display only a sample of their cards and we explore different strategies to select those samples based on the confidences assigned to the cards. An agent’s confidence that a particular card is the correct one is given by the number of times it observed that card in the decks of the other agents. We use a Gibbs distribution to select the card samples with the temperature measuring the strength of a noise that prevents the agents to correctly rank the cards. The group is guaranteed to find the common card in all runs solely in the infinite temperature limit, where the cards are sampled regardless of their confidences. In this case, we obtain the scaling form of the time constant that characterizes the asymptotic exponential decay of the failure probability. For finite time, however, a finite temperature yields a probability of failure that is several orders of magnitude lower than in the infinite temperature limit. The available experimental results are consistent with the decision-making model for finite temperature only. 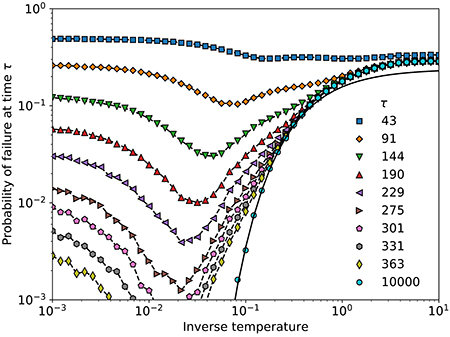