The spontaneous magneto-elastic (ME) interaction dictates the coupling between vortex arrays and crystal lattice, triggered by the spontaneous vortex nucleation in mixed state. In Ginzburg–Landau theory, the pinning interaction is ascribed to the interaction energy of first-order defect strain field and spontaneous elastic field. The pinning force is therefore estimated as the force on a dislocation imposed by the spontaneous stress field. Subsequently, the first-order pinning is compared with the weak collective pinning quantitively. The magnetization contribution by the first-order pinning is a parabolic dependence with field H, while the magnetization of the collective pinning shows a severe suppression at high fields as H−3. The difference in magnetization is attributed to the energy characterization in pinning mechanisms. As for the critical current density, the combination of first-order and collective pinning generally reproduces the experimental data of Ba0.75K0.25Fe2As2 sample where the second magnetization peak (SMP) disappears. In this view, the elasticity effect in mixed state is sufficient to cause the vanishment of SMP, especially in samples with high pressure dependence of Tc. 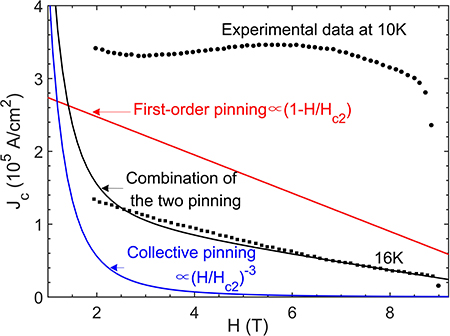