Real and imaginary energy gaps: a comparison between single excitation Superradiance and Superconductivity and robustness to disorder★

A comparison between the single particle spectrum of the discrete Bardeen-Cooper-Schrieffer (BCS) model, used for small superconducting grains, and the spectrum of a paradigmatic model of Single Excitation Superradiance (SES) is presented. They are both characterized by an equally spaced energy spectrum (Picket Fence) where all the levels are coupled between each other by a constant coupling which is real for the BCS model and purely imaginary for the SES model. While the former corresponds to the discrete BCS-model describing the coupling of Cooper pairs in momentum space and it induces a Superconductive regime, the latter describes the coupling of single particle energy levels to a common decay channel and it induces a Superradiant transition. We show that the transition to a Superradiant regime can be connected to the emergence of an imaginary energy gap, similarly to the transition to a Superconductive regime where a real energy gap emerges. Despite their different physical origin, it is possible to show that both the Superradiant and the Superconducting gaps have the same magnitude in the large gap limit. Nevertheless, some differences appear: while the critical coupling at which the Superradiant gap appears is independent of the system size N, for the Superconductivity gap it scales as (ln N)−1, which is the expected BCS result. The presence of a gap in the imaginary energy axis between the Superradiant and the Subradiant states shares many similarities with the “standard” gap on the real energy axis: the superradiant state is protected against disorder from the imaginary gap as well as the superconducting ground state is protected by the real energy gap. Moreover we connect the origin of the gapped phase to the long-range nature of the coupling between the energy levels. 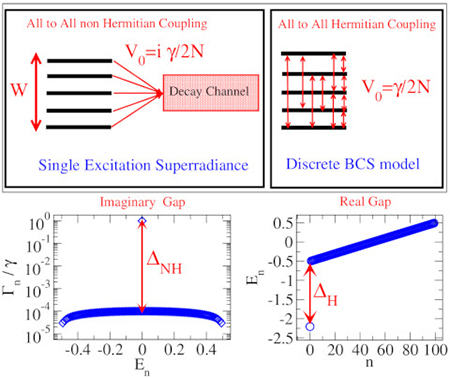