Stress and strain distributions in and around a single or two-coupled pyramidal InAs quantum dots (QDs) embedded in GaAs are calculated by finite element methods according to the continuum elasticity theory. By changing the quantum dot spacing and thickness of cap layer, the results about strain and stress distributions show compressive strain and stress distribution in the QDs and relaxation undergoes two stages with different speeds for different quantum dot height, quantum width and thickness of cap layer. The stress and strain distributions of pyramidal QDs would not vary monotonously with geometric dimensions. The height of quantum dot and cap layer thickness can effectively adjust the vertical correlation of self-assembly QDs according to the calculation. The shape of stress distribution at surface of cap layer can be tuned from a quadrangle into a circle by increasing the thickness of cap layer or decreasing the height of quantum dot. Also, a new approach to grow quantum ring is found in this paper. The calculations of two-coupled QDs show that the self-assembly technology might fail if the horizontal distance between two QDs is not large enough. The stress induced by upper QDs will be relaxed to zero with a longer distance downwards is found in this paper. 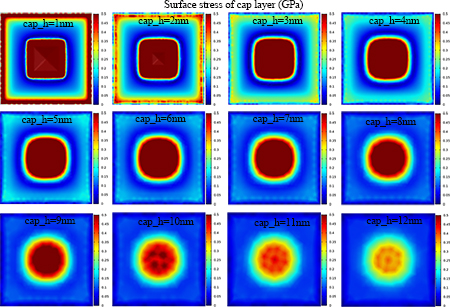