In order to understand the effect of irradiation on the material properties, we need to look into the atomistic evolution of the system during the recoil event. The nanoscale features formed due to irradiation will ultimately affect the macroscopic properties of the material. The defect production in pristine materials have been subject to investigation previously, but as the dose increases, overlap will start to happen. This effect of cascades overlapping with pre-existing debris has only recently been touched, and mainly been investigated for interstitial-type defects. We focus on vacancy-type defect clusters in BCC Fe and start a recoil event in their near vicinity. The final defect number as well as the transformation of the defect clusters are investigated, and their behaviour is related to the distance between the defect and the cascade centre. We found that for vacancy-type defects, the suppression of defect production is not as strong as previously observed for interstitial-type defects. The cascade-induced transformation, such as change in Burgers vector or creation of dislocations, was determined for all initial defect structures.

© The Author(s) 2019. This article is published with open access at Springerlink.com

This is an Open Access article distributed under the terms of the Creative Commons Attribution License (http://creativecommons.org/licenses/by/4.0), which permits unrestricted use, distribution, and reproduction in any medium, provided the original work is properly cited. 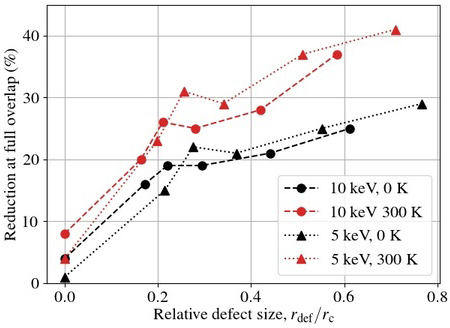