The metapopulation dynamical model with information spreading in SIS epidemic diffusion model is presented for random walkers for sub-populations to display the effect of awareness. Two-layer SIS-UA (susceptible-infected-susceptible-unaware-aware) epidemic model is considered to reveal the effect of information spreading in a graph, where, each node denoted a sub-population. The individuals migrate by random walk from one node to another node on the graph by themselves or forcefully to escape from contagious disease. Moreover, the individuals in a node are classified into four states as unaware susceptible (US), aware susceptible (AS), unaware infected (UI) and aware infected (AI). Meanwhile, to study the impact of graph topology on individuals in each node (subpopulation), four different graphs: star, cycle, wheel and complete are considered as representing both homogeneous and heterogeneous connections with the various number of nodes. The influence of migration for information spreading is displayed to subdue infected individuals with time steps. Finally, several impressive cases in terms of what attributes of individuals in each subpopulation being allowed (or say, pushed) migration are considered, which is summarized in the form of a full phase diagram. 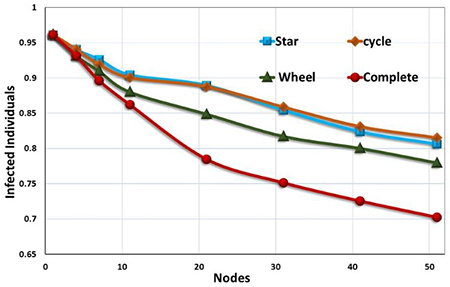