The ballistic conductance of a geometrically confined head-to-head 180° domain wall at a magnetic point contact in a two-dimensional (2D) metallic nanowire is studied theoretically. The ballistic conductance is computed by introducing the modified Landauer-Büttiker formalism in which the spin polarization effects are included. The analysis is based on coherent scattering of the carriers by the spin-dependent potential associated with the wall structure. The transmission properties of coherent states are obtained by introducing an algorithm to solve the coupled spin channels Schrödinger equation with mixed Dirichlet-Neumann boundary conditions applied far from the domain wall. Non-integer values for the conductance have been observed, due to the modified chemical potentials at the ferromagnetic contact probes. It has been shown that the dips in conductance arise when the electrons are partially polarized in the ferromagnetic leads, due to the formation of spin-dependent chemical potential. 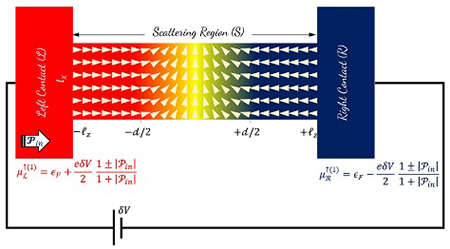