We present an elaborate and systematic study of the conductance properties of a zigzag bilayer graphene nanoribbon modeled by a Kane-Mele (KM) Hamiltonian. The interplay of the Rashba and the intrinsic spin-orbit couplings with the edge states, electronic band structures, charge and spin transport are explored in details. We have analytically derived the conditions for the edge states for a bilayer KM nanoribbon and show how these modes decay for lattice sites inside the bulk. It is particularly interesting to note that for a finite-size ribbon an even number of zigzag ribbon hosts a finite energy gap at the Dirac points, while the odd ones do not. This asymmetry is present both in presence and absence of a bias voltage that may exist between the layers. The interlayer Rashba spin-orbit coupling, along with the intralayer intrinsic spin-orbit and intralayer Rashba spin-orbit couplings seem to destroy the quantum spin Hall (QSH) phase where the QSH phase is identified by the presence of a conductance plateau (of magnitude 4e2∕h) in the vicinity of zero Fermi energy. The plateau is sensitive to the values of the spin-orbit coupling parameters. Further, the spin polarized conductance data reveal that a bilayer KM ribbon is found to be more efficient for spintronic applications compared to a monolayer graphene. Finally, a quick check with experiments is done via computing the effective mass of electrons. 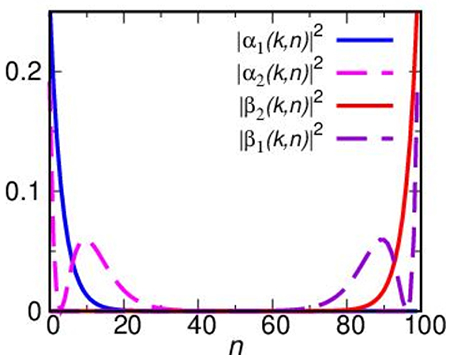