Band folding, strain, confinement, and surface relaxation effects on the electronic structure of GaAs and GaP: from bulk to nanowires

It is common to find materials that show strikingly different properties between its bulk and nanometric forms. In this paper we show how to link the electronic structures of two III-V systems, one a direct gap material, GaAs, and the other an indirect gap material, GaP, from their bulks right down to the shape of thin nanowires. The understanding of how these changes occur represents a scientific and technological challenge and is relevant for the design and prediction of novel nanostructured materials. GaAs and GaP bulk and nanowire systems are studied in the zinc-blende and wurtzite structures both free of strain and subjected to biaxial strains perpendicular to the [111]/[0001] direction (the kind of strain that the materials are subjected to when grown one on top of the other). We provide an interpretation of the band structure of nanowires, grown along the [111] (zinc-blende structure) and the [0001] (wurtzite structure) directions, in terms of the bulk band structures of the corresponding binary compounds. The procedure reveals the origin of the valence and conduction valleys relevant to determine the nature (direct or indirect) of the band gaps and the kind (direct and pseudodirect) of the valence to conduction transitions. Thus, by calculating only the bulk bands it is possible to describe the behavior of the nanowire bands even for very thin nanowires. The effects on the band structures due to biaxial strain are analogously analyzed, providing for bulk GaP the first results in literature. The role of confinement, and surface relaxation, in determining the nanowire electronic structure of thin nanowires are analyzed separately revealing that the change in the nature of the band gap is due mainly to surface relaxation effects, not confinement. We show that the change of the gap (indirect/direct) from the bulk to the 1D systems is mainly due to the competition between the energies of bulk conduction valleys which are differently influenced by confinement and strain. This effect is shown also by other low dimensional materials like the 2D materials extending only few atomic layers in one dimension. The competing valleys are already present in the bulk band structure. While the main effect of confinement is to open all gaps, it is not necessarily the main cause of the direct/indirect change in the nature of the electronic gap as instead is usually claimed in the literature. Our study can be used to understand and engineer the structure of many nanostructures systems by just better analysing the behavior of the bulk bands. 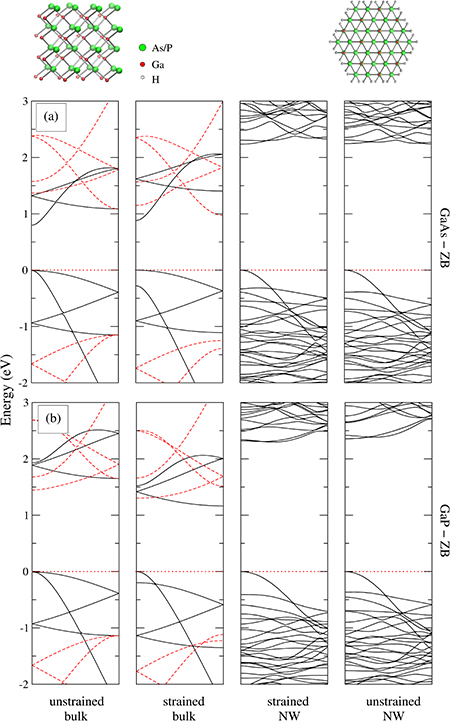