Lattice vacancies are a major concern for the use of the Y3Al5O12 garnet (YAG) in optical applications. They are known to trap charge carriers preventing them from reaching luminescence centers. This reduces useful photon emission and deteriorates performance. Recent efforts to characterize such defects include experimental works by positron-annihilation spectroscopy (PAS) where extensive positron trapping was reported and attributed to defects made up of both cation and oxygen vacancies. The present study reports first-principles calculations for monovacancy and divacancy defects in YAG by means of conventional and two-component density-functional theory. The defect formation energies and corresponding charge-transition levels in the gap were initially determined. The ability of the lower-energy defects to act as positron-trapping centers was then examined. Corresponding positron lifetimes and binding energies to defects were calculated and compared to the experimental PAS data. The lifetimes of aluminum monovacancies agreed well with experiment if gradient corrections are included in the electron-positron correlation. Association of oxygen with aluminum vacancies was found to lead to stable negatively-charged divacancy complexes which also trap positrons. These defects are characterized by longer positron lifetimes, in agreement with the experimental observations. 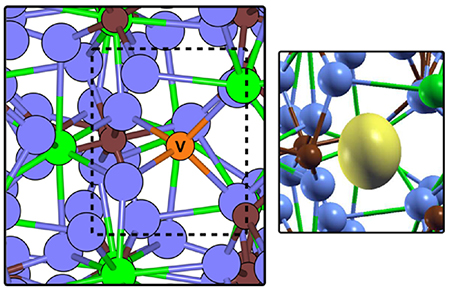