In this paper, we analyse the emergent response of random resistor-capacitor (RC) networks, which are widely used in modeling binary composite materials. By simply introducing two kinds of capacitors C and C′, we simulate the size effect of micro-capacitors formed by dielectric regions separating conductive regions in real materials. A low-power law emergent response (low PLER) is obtained in the framework of these random networks which we will be naming (RCC’) therein. This simple model also explains the observed low frequency dispersion in porous sample of the perovskite lead zirconate titanate (PZT) as well as lead halide perovskite solar cells. The calculations has been achieved by using the well known Frank and Lobb algorithm. In addition, we investigate the effect of capacitor proportions and value ratios (C′/C) on the PLER. A good agreement with EMA predictions is obtained at intermediate frequencies. 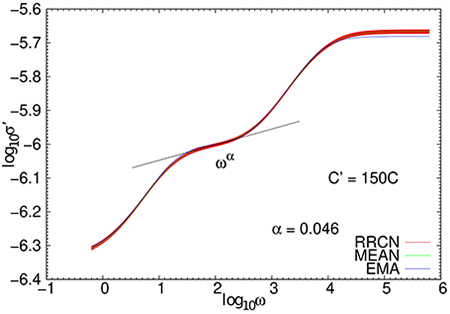