State transitions in the Morris-Lecar model under stable Lévy noise

This work is about the state transition of the stochastic Morris-Lecar neuronal model driven by symmetric α-stable Lévy noise. The considered system is bistable: a stable equilibrium (resting state) and a stable limit cycle (oscillating state), and there is an unstable limit cycle (borderline state) between them. Small disturbances may cause a transition between the two stable states, thus a deterministic quantity, namely the maximal likely trajectory, is used to analyze the transition phenomena in a non-Gaussian stochastic environment. According to the numerical experiment, we find that smaller jumps of the Lévy motion and smaller noise intensities can promote such transition from the sustained oscillating state to the resting state. It also can be seen that larger jumps of the Lévy motion and higher noise intensities are conducive for the transition from the borderline state to the sustained oscillating state. As a comparison, Brownian motion is also taken into account. The results show that whether it is the oscillating state or the borderline state, the system disturbed by Brownian motion will be transferred to the resting state under the selected noise intensity with a high probability. 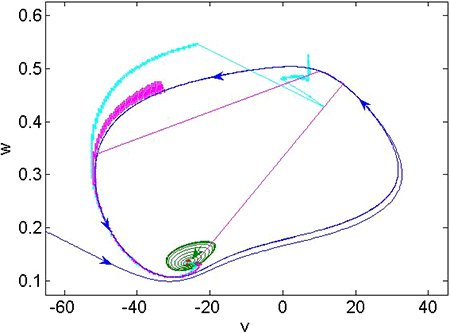