The electronic, magnetic and optical properties of dual doped bilayer graphene (BLG), containing the impurity of Se in one monolayer, and X (= Ga, P, S) in other one, were calculated by DFT approach. Given the band structures and DOS diagrams, for the Se-P doped BLG the half-metallic, for the case of Se-Ga the metallic, and for the Se-S doped BLG the semiconductor behavior was observed. These properties were analyzed by plotting the diagrams of equipotential surfaces, spin polarization and PDOS. By calculating the optical properties using TDDFT approach, we found some evidences for the formation of surface plasmons in the Se-Ga doped BLG. Due to their impurities, the absorption spectrums of the three structures in the UV range have significant differences with respect to each other. Finally, in the most optical variables, according to the similarity of Se and Ga atoms in their closed-shell cores, in Se-Ga doped BLG the peaks are stronger and sharper. 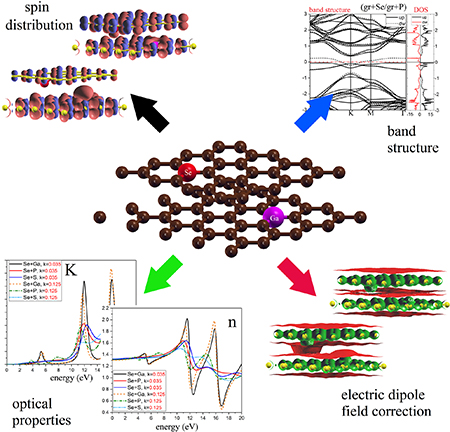