We study the asymptotic decay of the Friedel density oscillations induced by an open boundary in a one-dimensional chain of lattice fermions with a short-range two-particle interaction. From Tomonaga-Luttinger liquid theory it is known that the decay follows a power law, with an interaction dependent exponent, which, for repulsive interactions, is larger than the noninteracting value − 1. We first investigate if this behavior can be captured by many-body perturbation theory for either the Green function or the self-energy in lowest order in the two-particle interaction. The analytic results of the former show a logarithmic divergence indicative of the power law. One might hope that the resummation of higher order terms inherent to the Dyson equation then leads to a power law in the perturbation theory for the self-energy. However, the numerical results do not support this. Next we use density functional theory within the local-density approximation and an exchange-correlation functional derived from the exact Bethe ansatz solution of the translational invariant model. While the numerical results are consistent with power-law scaling if systems of 104 or more lattice sites are considered, the extracted exponent is very close to the noninteracting value even for sizeable interactions. 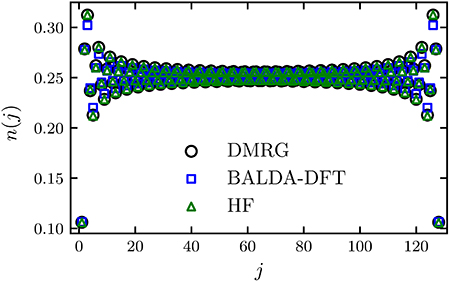