Magnetic field induced multiple non-Dirac nodal-lines are found to emerge in the triplet dispersion bands of a frustrated spin-1/2 antiferromagnetic model on the CaVO lattice. Plaquette and bond operator formalisms have been employed to obtain the triplet plaquette and bond excitations for two different parameter regimes in the presence of nearest and next-nearest-neighbor Heisenberg interactions based on the plaquette-resonating-valence-bond and dimerized ground states, respectively. In the absence of magnetic field a pair of six-fold degenerate nodal-loops with distinct topological feature is noted in the plaquette excitations. They are found to split into three pairs of two-fold degenerate nodal-loops in the presence of magnetic field. In the other parameter regime, system hosts two-fold degenerate multiple nodal-lines with a variety of shapes in the triplon dispersion bands in the presence of magnetic field. Ground state energy and spin gap have been determined additionally for the two regimes. Those nodal-lines are expected to be observed in the inelastic neutron scattering experiment on the frustrated antiferromagnet, CaV4O9. 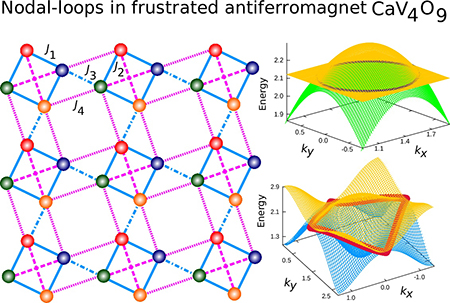