, both intra- and interlayer static PCFs are calculated for their dependence on carrier density

, and interlayer spacing d. Besides, the static wavevector-dependent density susceptibility is obtained to probe the role of these effects on the hitherto existence of density-modulated phases in the bilayer. We find that thermal effects in overall make correlations weaker, but the mass-asymmetry results in stronger correlations both within and across the layers, with the effect being most pronounced in the holes layer. In the strong coupling regime (i.e., large

), the intra- and interlayer PCFs show pronounced in-phase periodic oscillations, typical of a spatially localized phase in the bilayer. Correspondingly, the in-phase component of static density susceptibility is seen to exhibit in the close approach of two layers an apparently diverging peak at a wavevector coincident with the location of sharp peak in the static structure factor, implying the emergence of a density-modulated phase in the bilayer. Parallel to the zero-temperature study, the charge-density-wave (CDW) phase is found to dominate at higher densities, with a cross-over to the Wigner crystal (WC) phase below a critical density. As an interesting result, we find that while thermal effects tend to oppose the formation of density-modulated phase, the electron–hole mass-asymmetry boosted correlations favour it, with the two effects almost cancelling out at

, thus resulting in the CDW-WC cross-over at nearly the same critical density as for a zero-temperature mass-symmetric electron–hole bilayer. Our prediction of coupled WC phase is found to be in qualitative agreement with path-integral Monte Carlo simulations. 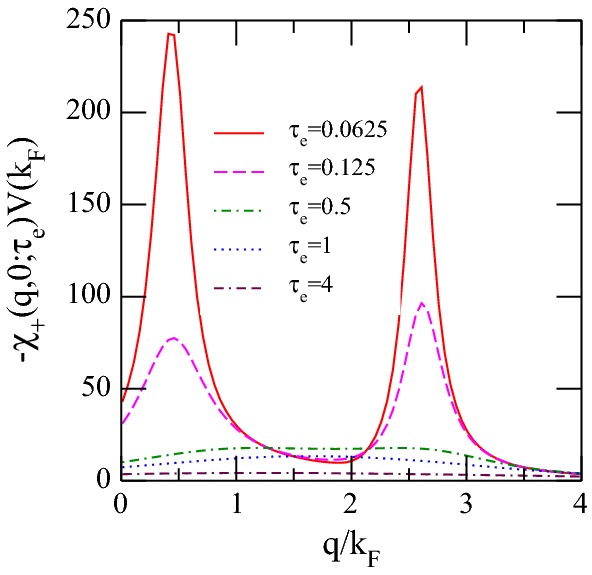