We study the thermoelectric transport through a single-level quantum dot (QD) coupled to two normal metallic leads and side-coupled to Majorana bound state (MBS). The Coulomb interaction in QD is considered. To investigate only the influence of MBS on thermoelectric transport, we focus on the relatively high temperature region (T ≫ TK), where Kondo effect does not appear. The electric and thermal conductance and thermopower as a function of gate voltage (i.e. QD level) are completely different whether the coupling between MBSs is zero or not. When the coupling between MBSs is finite, all thermoelectric characteristics are similar to the transport without MBS. However, for zero MBSs’ coupling, the electric and thermal conductance peaks are reduced by 3/4. Especially, in the case of QD without MBS, the sign of thermopower changes three times, however, in the case of QD strongly side-coupled to ideal and isolated MBS, the sign of thermopower changes 9 or 5 times. It can be used for detecting of the signature of MBS. It has actual possibilities when the nanowire is long enough and pure without any defects. 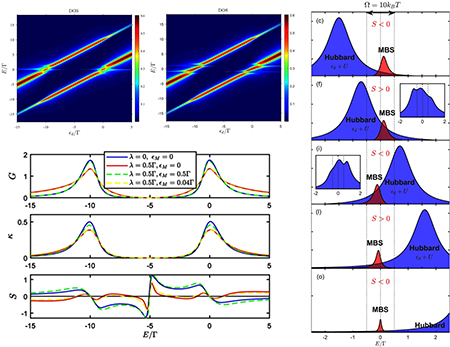