Zigzag and armchair hexagonal graphene quantum dots (GQDs) are employed as tunneling spectrometers to detect the signature of Majorana bound states (MBSs) located at the ends of a hybrid nanowire-superconductor junction. The formulas of tunneling current and shot noise are derived to exhibit the local and non-local Andreev reflections induced by MBSs. When the energy splitting of MBSs in the nanowire (εM) is zero, the hybridization of zero-bias state which comes from normal tunneling and MBSs appears in the zigzag hexagonal GQD system. For the armchair hexagonal GQD under the condition εM = 0, the zero-bias conductance peak emerges in the energy gap to show the absolute contribution of MBSs. When εM ≠ 0, the zero-bias conductance peak splits into symmetrically distributed multi-peaks. These signify that the connected MBSs open novel channels for electrons to tunnel through the metallic and semiconducting GQDs. Shot noise is enhanced by MBSs to form different appearances depending on concrete GQDs. The zigzag GQD system always displays sub-Poissonian shot noise, while super-Poissonian shot noise appears in the armchair GQD system due to the coupling of MBSs. We can distinguish the contributions of MBSs from that of normal tunneling electrons by shot noise and Fano factor at low energy region. 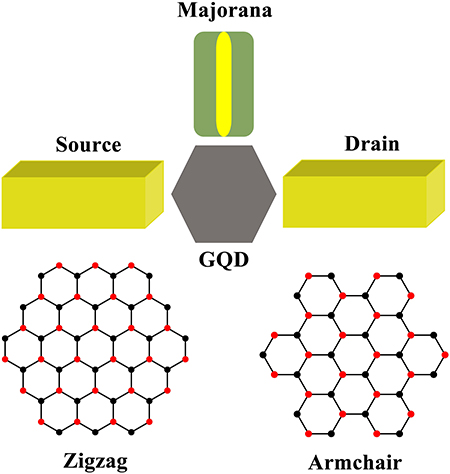