Graph theoretical approaches for the characterization of damage in hierarchical materials★

We discuss the relevance of methods of graph theory for the study of damage in simple model materials described by the random fuse model. While such methods are not commonly used when dealing with regular random lattices, which mimic disordered but statistically homogeneous materials, they become relevant in materials with microstructures that exhibit complex multi-scale patterns. We specifically address the case of hierarchical materials, whose failure, due to an uncommon fracture mode, is not well described in terms of either damage percolation or crack nucleation-and-growth. We show that in these systems, incipient failure is accompanied by an increase in eigenvector localization and a drop in topological dimension. We propose these two novel indicators as possible candidates to monitor a system in the approach to failure. As such, they provide alternatives to monitoring changes in the precursory avalanche activity, which is often invoked as a candidate for failure prediction in materials which exhibit critical-like behavior at failure, but may not work in the context of hierarchical materials which exhibit scale-free avalanche statistics even very far from the critical load. For such anomalous systems, our novel indicators prove more effective in the analysis of digital image correlation data from experiments, as well as from large-scale numerical simulations. 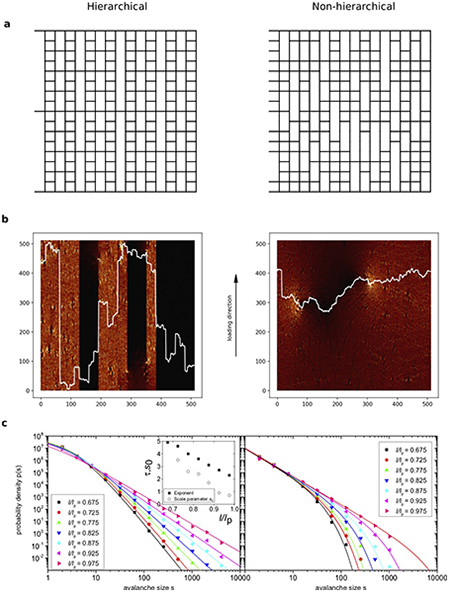