When materials are loaded below their short-term strength over extended periods, a slow time-dependent process known as creep deformation takes place. During creep deformation, the structural properties of a material evolve as a function of time. By means of a generic coarse-grained mesoscopic elastoplastic model which envisages deformation as a sequence of stochastically activated discrete events, we study the creep deformation of disordered materials. We find that the structural evolution of the material during creep modifies not only the average material properties but also changes the statistics of those properties. We analyze the emergence of correlations in the strain localization and deformation activity patterns, the variation of the event rate and the evolution of the inter-event time distribution. We find that the event rate follows the Omori law of aftershocks, which is the discrete counterpart of Andrade’s transient creep law, and that the exponent of these laws only depends on the microstructural heterogeneity. Finally, we find during the initial stages of transient creep a transition from Poisson distributed inter-event times towards a non-trivial power law distribution. 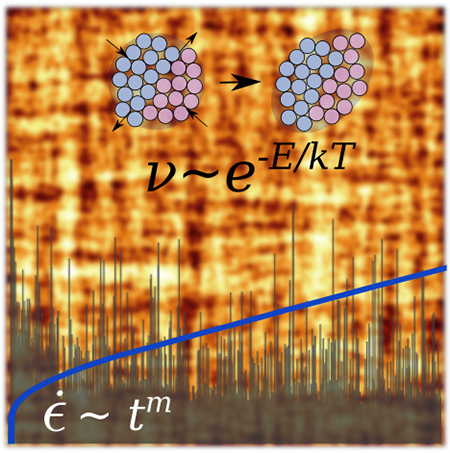