We theoretically investigated the effects of magnetic field and of the parameters of control and probe lasers on the transparency induced through Autler–Townes splitting (ATS) in GaAs/GaAlAs pseudo-elliptic quantum ring. We showed that if equal decay rates are considered the investigation of the electromagnetically induced transparency phenomenon can be done only in the strong coupling regime. Our study reveals that the quantum system is in a Λ configuration in the absence of external fields but, in the presence of the magnetic field, it may present simultaneously many configurations (of Λ, Ξ and V type) that allow the occurrence of transparency, separated by very narrow regions of magnetic fields where no configuration is active. The magnetic field determines almost periodically the switch between configurations. We demonstrated that in V (Ξ) configurations the ATS requires the greatest (lowest) intensity of the control laser and of the energy of the probe laser. 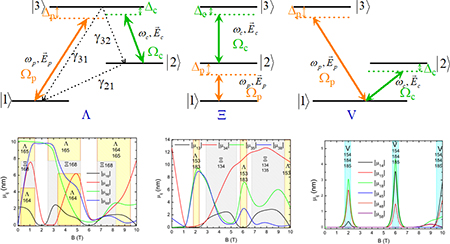