The chiral kinetic theory is derived from exact spinor mean field equations without symmetry-breaking terms for large classes of SU(2) systems with spin-orbit coupling. The influence of the Wigner function’s off-diagonal elements is worked out. The decoupling of the diagonal elements renormalizes the drift according to Berry connection which is found as an expression of the meanfield, spin-orbit coupling and magnetic field. As special limit, Weyl systems are considered. The anomalous term ~EB in the balance of the chiral density appears consequently by an underlying conserving theory. The experimental observations of this term and the anomalous magneto-transport in solid-sate physics usually described by chiral kinetic theory are therefore not a unique signal for mixed axial-gravitational or triangle anomaly and no signal for the breaking of Lorentz-invariance. The source of the anomalous term is by two thirds the divergence of Berry curvature at zero momentum which can be seen as Dirac monopole and by one third the Dirac sea at infinite momentum. During the derivation of the chiral kinetic theory this source by the Dirac sea is transferred exclusively to the Dirac monopole due to the projection of the spinor Wigner functions to the chiral basis. The dynamical result is shown to suppress the anomalous term by two thirds. 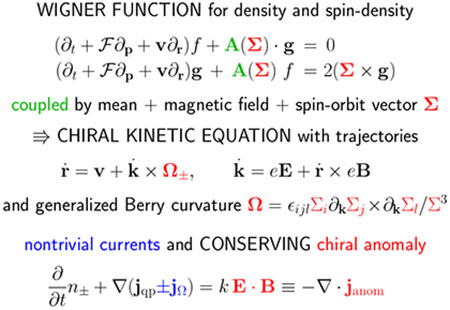