We attentively investigate the effects of short-range fermion-fermion interactions on the low-energy properties of both two-dimensional type-I and type-II tilted Dirac semimetals by means of the renormalization group framework. Practicing the standard renormalization group procedures via taking into account all one-loop corrections gives rise to the coupled energy-dependent evolutions of all interaction parameters, which are adopted to carefully examine whether and how the fermion-fermion interactions influence the low-energy physical behaviors of tilted Dirac fermions. After carrying out the detailed analysis of coupled flows, we figure out the tilting parameter dictates the low-energy states of tilted Dirac fermions in conjunction with starting values of fermion-fermion couplings. With proper variations of these two kinds of parameters, the tilted Dirac fermions can either flow towards the Gaussian fixed point or undergo certain instability that is conventionally accompanied by a phase transition in the low-energy regime. In addition, all potential instabilities can be clustered into five distinct classes owing to the competitions between the tilting parameter and initial fermionic interactions. Moreover, the dominant phases accompanied by the instabilities are determined via computing and comparing the susceptibilities of eight potential phases. 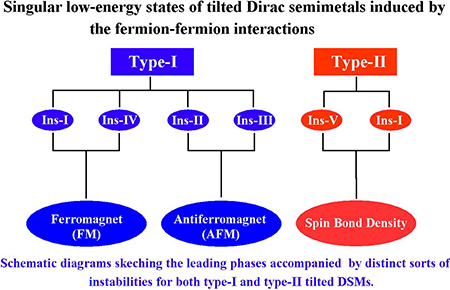