Quantum dynamics from fixed points and their stability

We approach quantum dynamics in one spatial dimension from a systematic study of moments starting from the dynamics of the mean position. This is complementary to the approach of Brizuela whose starting point was generalized recursion relations between moments. The infinite set of coupled equations is truncated which allows us to use the techniques used in the study of dynamical systems. In particular we predict for what initial variance the purely quartic oscillator will time develop with minimal change in the shape of the initial packet and what the frequency of oscillation of the mean position will be. We show how quantum fluctuations will cause a particle to escape from the well of a volcano potential and how they will cause an oscillation between the two wells of a double well potential. Further, we consider an oscillatory external field in addition to the double well potential and work near the separatrix where the classical system is known to be chaotic. We show how the quantum fluctuations suppresses the chaotic behaviour after a time interval inversely proportional to the strength of the quantum fluctuations. 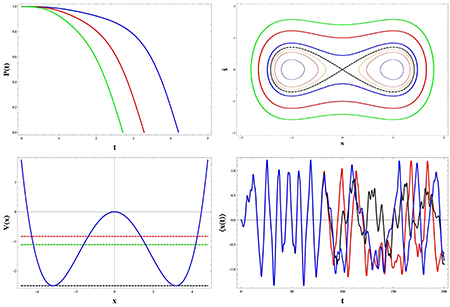