Based on recently obtained from Kolmogorov–Feller equation exact analytical results for the steady-state probability density function of nonlinear dynamical systems driven by white Poisson noise with exponentially distributed amplitudes of pulses we analyze some models of ecology and genetics. Specifically, we find the steady-state probability distribution of the population density in the framework of well-known Verhulst equation with fluctuating population mortality in the form of Poisson sequence with unipolar pulses, leading to an abrupt decrease in population density at random times. As shown, the most probable value of the population density tends to zero with increasing the mean rate of pulses, that is, to an extinction of biological population in perspective. Further, we consider the stochastic Hongler equation which can serve as an approximate model of genetic selection. In the case of multiplicative white Poisson noise having bipolar exponentially distributed amplitudes of pulses we observe noise-induced transition to bimodality (through the trimodal phase) in the steady-state probability distribution with an increase in the mean frequency of pulses. We also discovered a new phenomenon, namely, a direct transition from unimodality to trimodality with a change in the noise intensity, which could not be detected in the framework of the Gaussian perturbation. 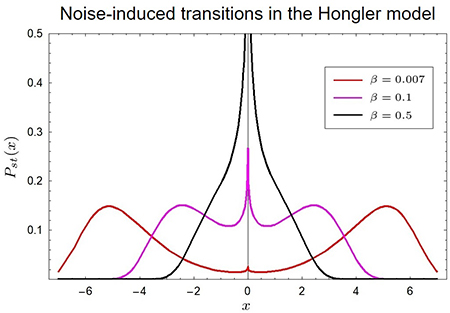