This paper is a theoretical study of the stochastic thermodynamics of a single, optically trapped particle that is initially in equilibrium at temperature T and is then subjected to a steady 2D extensional flow. Specifically, it is an attempt to show how fluctuation theorems arise in systems governed by thermal noise and the opposing effects of harmonic confinement and hydrodynamic driving. Among the paper’s findings are the following: (i) that at long times, following the imposition of the flow, the system settles into an equilibrium stationary state that obeys detailed balance and that is characterized by an effective Boltzmann potential, such that the free energy change ΔF between the initial and final states is determined by the ratio of the corresponding partition functions, (ii) that the work done in the process w and the accompanying change in total entropy of system and surroundings, ΔStot, both satisfy fluctuation theorems, the first the Jarzynski equality ⟨e−w/kBT⟩ = e−ΔF/kBT, and the second the integral fluctuation theorem, ⟨e−ΔStot/kB⟩ = 1, and (iii) that under a frame-invariant version of thermodynamics used to describe flow-driven particle motion, the work done W satisfies the Bochkov-Kuzovlev relation, ⟨e−W/kBT⟩ = 1, while the associated total entropy change continues to satisfy the integral fluctuation theorem. These results have an immediate bearing on prior results from this lab on the dynamics of flow-driven polymers; in particular, they highlight the need to revise a number of our earlier conclusions. 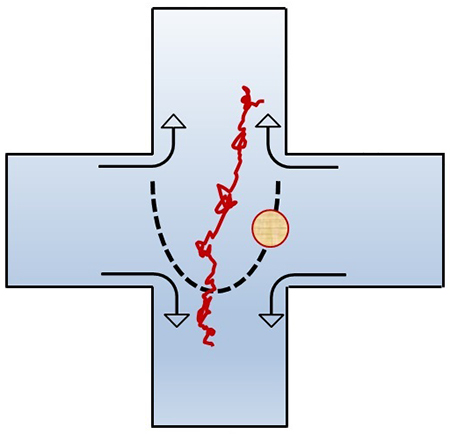