Elastic stiffness moduli were studied using dispersion-corrected density functional theory. The elastic stiffness moduli of α-DIPAB molecular crystals are found to be strongly anisotropic, with exceptionally high values of ~55 GPa. The magnitude of elastic stiffness modulus is strongly correlated with the relative orientation between the underlying hydrogen-bonding networks of DIPA molecules (“stitched” together by Br ions). These values of elastic stiffness modulus are remarkably high and suggest the design of hydrogen bond networks as a route for rational design of ultra-stiff molecular solids. Furthermore, Young’s modulus of α-DIPAB was found to attain extremely large value of as large as 50 GPa along certain crystallographic directions, while Br-deficient DIPAB has reduced Young’s modulus ( ~18 GPa). Anisotropy of Young’s modulus in α-DIPAB is very large with values below 40% of its maximum along specific spatial directions (and even lower in Br-deficient crystals). α-DIPAB and Br-deficient DIPAB show very different directionality of Young’s modulus due to the change in H-Br bond network upon Br deficiency. Additionally, Poisson’s ratio is strongly anisotropic as well with values ranging between a maximum of 0.4 for certain crystallographic directions and about 0.25 for other directions indicating the directionality of bonding in α-DIPAB. DIPAB systems are brittle based on the ratio between bulk and sheer elastic constants. Thus, DIPAB should be used as an element of composite materials to be used in thin-film flexible electronic application. 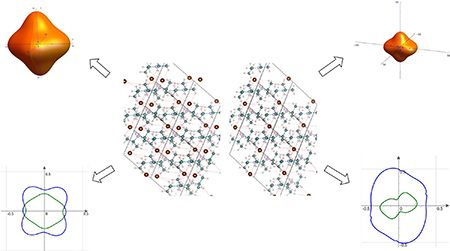