A theoretical analysis is reported for the spin waves in ferromagnetically-ordered magnonic crystals consisting of lateral periodic arrays of composite nanowires. The structure of each nanowire is a vertically-developed multilayer built up according to a quasiperiodic Fibonacci sequence. Each nanowire is separated by a non-magnetic spacer in either direction. The quasiperiodicity in these composite nanowires is addressed in two ways: the geometric variation in a single-component (permalloy) structure and the compositional variation (using cobalt and permalloy). These composite nanowire structures are compared and contrasted with one another. A microscopic approach is used to calculate the spectra of spin-wave bands and band gaps for several generation numbers of the Fibonacci sequence. Comparison of the density of states for these structures is made with that for the periodic cases, which highlights distinct characteristics of the quasiperiodicity. The fractal-like scaling properties of the modes show characteristics analogous to some complex biological systems. 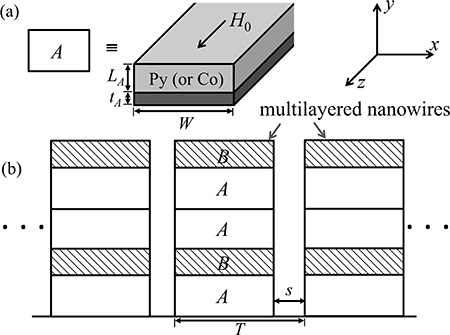