The effect of vacancy defects on electrons transport behavior of the alpha-armchair graphyne nanoribbons has been studied by density-functional tight-binding and non-equilibrium Green’s function methods. Three different widths of the nanoribbons with 6, 7 and 8 atoms and four types of vacancy defects contain one, two, three and four missing atoms were selected in this study. In relaxed structures, the structural changes around the defects are observed. Some of the free hands form new atomic chains containing 6 or 7 atoms. Comparing with perfect devices, the current decreases at the defective devices with 8 atoms width, whereas, it increases for devices with 6 atoms width. By calculating the density of states, transmission spectrums and molecular energy spectrums for devices with 6-atoms widths, there is a resonance state for DDOS and T(E) peaks in the QV device, while the peak of the density of states and transmission spectrums does not match in the SV1 device. Also, the results show that HOMO-LUMO gap energy in the SV1 device is much more than the perfect and QV devices. For devices with 8 atoms width, the transmission spectrums are reduced for all defects due to the lower density of the energy level of molecular energy. However, the orbital distribution of LUMO state in the device with the defect is localized but for the perfect structure, both the LUMO and the HOMO orbital distribution are quite delocalized. 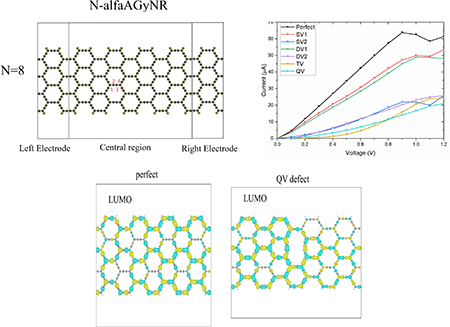