We study a variant of the cyclic Lotka–Volterra model with three-agent interactions. Inspired by a multiplayer variation of the Rock–Paper–Scissors game, the model describes an ideal ecosystem in which cyclic competition among three species develops through cooperative predation. Its rate equations in a well-mixed environment display a degenerate Hopf bifurcation, occurring as reactions involving two predators plus one prey have the same rate as reactions involving two prey plus one predator. We estimate the magnitude of the stochastic noise at the bifurcation point, where finite size effects turn neutrally stable orbits into erratically diverging trajectories. In particular, we compare analytic predictions for the extinction probability, derived in the Fokker–Planck approximation, with numerical simulations based on the Gillespie stochastic algorithm. We then extend the analysis of the phase portrait to heterogeneous rates. In a well-mixed environment, we observe a continuum of degenerate Hopf bifurcations, generalizing the above one. Neutral stability ensues from a complex equilibrium between different reactions. Remarkably, on a two-dimensional lattice, all bifurcations disappear as a consequence of the spatial locality of the interactions. In the second part of the paper, we investigate the effects of mobility in a lattice metapopulation model with patches hosting several agents. We find that strategies propagate along the arms of rotating spirals, as they usually do in models of cyclic dominance. We observe propagation instabilities in the regime of large wavelengths. We also examine three-agent interactions inducing nonlinear diffusion. 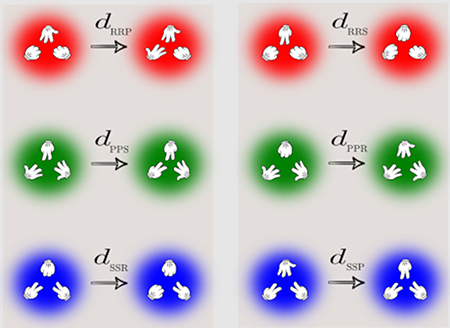