We investigate the effects of reflecting connectivity in a network composed of FitzHugh–Nagumo (FHN) elements linked in a ring topology. Reflecting connectivity is inspired by the linking between the opposite hemispheres in the mammalian brain. To study synchronization phenomena and coexistence of synchronous and asynchronous domains (chimera states) under the influence of this connectivity, we use two versions of the FHN model: Version I where membrane and recovery potentials are interlinked via a rotational matrix (Omelchenko et al. PRL 110:224101, 2013), and version II where only the membrane potentials are linked and not the recovery ones (Shepelev et al., Phys. Lett. A 381:1398, 2017). In both realizations, the reflecting connectivity forces the activity to organise in two connected semirings. Our numerical results give evidence that, for FHN-I and positive (negative) coupling strength, coherent (incoherent) oscillatory regions develop and reside in the junctions between the two semirings. For the FHN-II model which supports multistability, our simulations indicate that for appropriate values of the parameters the two semirings are separated via oscillating elements. The center parts of the two semirings are composed either by elements which are frozen at the FHN fixed points (coexistence of fixed points and oscillatory states), or by coherent oscillatory elements (coexistence of coherent and incoherent nodes). Notable, here, is the case of oscillation death, which has also been reported for other oscillators coupled via one of their variables. These results can be useful for interpreting inhomogeneous and localised coordinated activity observed in the mammalian brain. 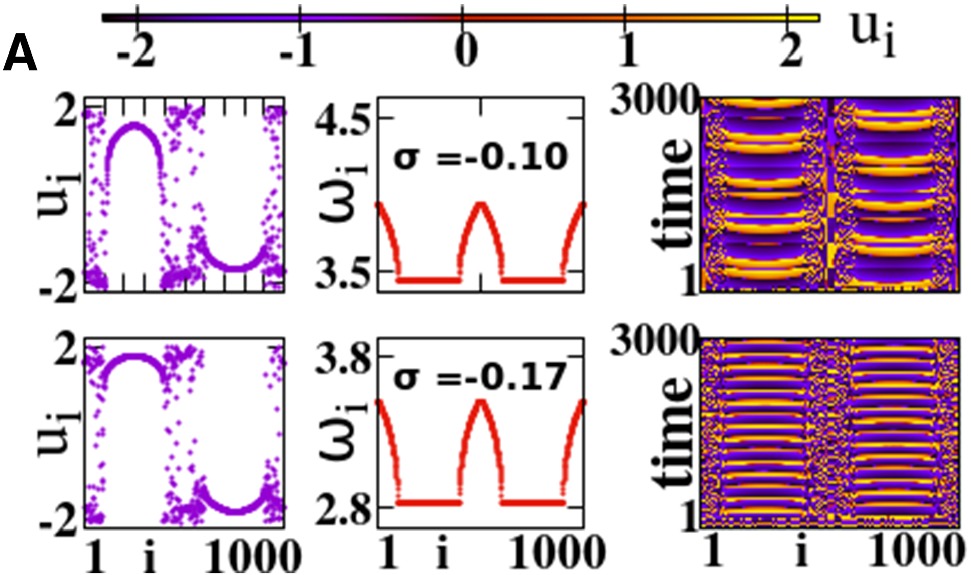