Two dimension (2D) Blume–Emery–Griffiths (BEG) spin-1 model is used to investigate spin-crossover (SCO) and Prussian Blue Analogs (PBAs) solids. The model considered here allows the system to switch between two fundamental spin states named high-spin (HS) and low-spin (LS) states subsequent to the strength of magnetic and elastic interactions which acting on lattice nearest neighbors sites. These interactions are assumed as temperature-dependent due to the system volume changes accompanying with the spin transition phenomenon. In addition, SCO molecules are subject to a variable frequency of magnetic-field lifting the degeneracy in the HS state. A stochastic cooperative dynamics of this BEG-like Hamiltonian, describing the nonequilibrium properties of ferromagnetic SCO solids, is derived from the Glauber approach, with appropriate Arrhenius microscopic transition rates. At the vicinity of the thermal hysteresis loop of the free system (obtained with zero-magnetic field), investigations with variable oscillation frequency of the magnetic-field, h, demonstrated significant changes on the isothermal relaxation curves of the magnetization, m, and the high-spin fraction,

, which fall down on dynamical equilibrium characterized by limiting cycles in the spaces m-h and

-h. In addition, the clear evidence of dephasing between the responses of the two order parameters (m and

) and the particular “butterfly” shape of the limiting cycles of the HS fraction, enforces the idea that the non-linear effects, propagating through the interaction parameters, are operating in this system. These behaviors demonstrate that radio-frequency magnetic field can be used in these SCO systems to achieve a reversible switch and control of both magnetization and HS fraction, even if the latter is partial. These results are in direct relation with the intrinsic static multi-stability of the system under static magnetic-field, which is enhanced/revealed by applying an oscillating magnetic-field.

Graphical abstract: The nonequilibrium properties of spin-crossover (SCO) solids are analyzed within 2D Blume–Emery–Griffiths (BEG) spin-1 model in which SCO molecules are subjected to a variable frequency of magnetic-field energy controlled by the parameter

. Within the lattice configuration, to account for spin-phonon interactions, the strengths of magnetic and elastic interactions between nearest neighbors (nn) sites are temperature-dependent. At the vicinity of the thermal hysteresis loop of the free system, the isothermal relaxation curves of the magnetization m and the high-spin fraction,

. The shift phase appears between the response of the two parameters (m and

) which particular non-linear behaviors would seem to stem from the interactions propagating within the system through the interaction parameters. These behaviors revealed that radio-frequency magnetic-field can be used in these SCO systems to achieve a reversible switch and control of both magnetization and HS fraction. 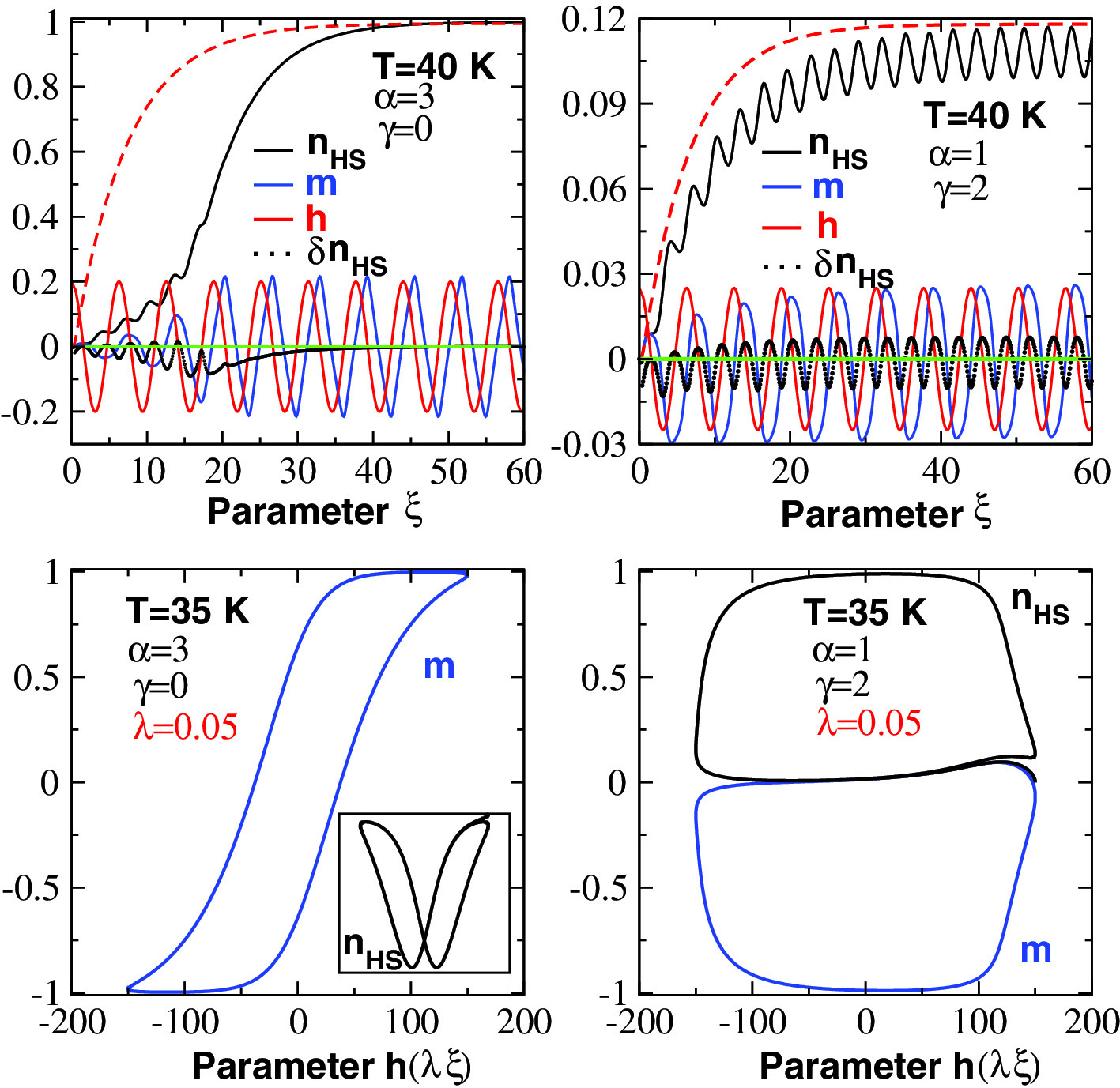