Diffusion mechanism and dependence of diffusion on sodium silicate compositions

The distribution of sodium and diffusion mechanism in sodium-silicate melt with various compositions are investigated via molecular dynamics simulation. The microstructure and dynamical characteristic have been studied with the help of Voronoi polyhedron, simplex and Si-O subnet, oxygen-cluster. The simulation results reveal that Na atoms tend to be in the O polyhedrons and not in Si ones. Moreover, the Na atoms are mainly located in non-bridging oxygen (NBO) and free oxygen (FO) polyhedrons. The Voronoi volume of bridging oxygen (BO) or NBO weakly depends on the number of Na located in polyhedron which indicates the strong Si-O bond compared to Na-O bond. The structure of sodium silicate melt consists of two separate regions: the Na-poor regions of Si-BO subnets and a Na-rich region of NBO-FO cluster. The density of sodium in the NBO-FO cluster is by 3–6 times larger than the one of Si-O subnets. This largest NBO-FO cluster represents a diffusion channel for sodium in sodium-silicate. Furthermore, we find that each BO polyhedron contains 0 or 1 Na atom meanwhile each NBO polyhedron contains 1 or 2 Na atoms. Thereby, the BO and NBO polyhedron contains 1 and 2 sites, respectively. The energy for Na atom located in BO site is larger than that in NBO site. The transition energy for Na atom moving from present site to neighboring NBO site is smaller than that to neighboring BO site. So, Na atoms move frequently to neighboring polyhedrons of NBO, and rarely to the BO ones. 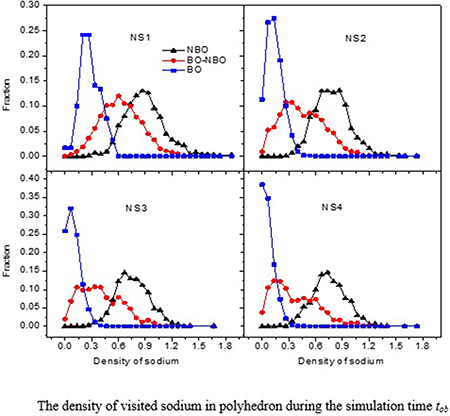