We use molecular dynamics simulation to investigate the diffusion and microstructure of Na2O⋅3SiO2 and Na2O⋅4SiO2 liquid. It is shown that the temporal locations of Na are placed nearby O atoms. The O and Si atoms diffuse via the NBO ↔BO and SiO4 ↔SiO3 transformations. Meanwhile the diffusion of sodium is realized by mixed hopping-like and cooperative mechanism. Accordingly, Na atoms move from sites to other sites that are located nearby O atoms. Each NBO and BO has two and one sites, respectively. The Na atom prefers to move to NBO sites rather than to BO sites. Furthermore, Na atoms are collectively redistributed between different O atoms as the NBO ↔BO transformation happens. The diffusion pathways for sodium located in overlapped NFxBy cells contain large number of NF sites and small amount of BO sites. The dynamics of O atoms is analyzed through specified sets of most mobile and immobile atoms. The simulation showed that the dynamics of O atoms is heterogeneous. During moderately long time, the Si–O network consists of separate immobile domains where the local density of Na atoms is smaller than that in the rest of the network. 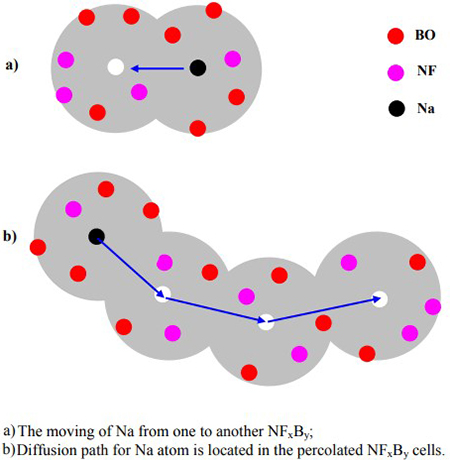