Large models of silica melt have been produced at 3500 K and pressures of 0, 5, 10, 15, 20, 25, 30 and 45 GPa by molecular dynamics simulation. New topological analysis is performed based on shell–core particles. The simulation shows that although the fraction of different types of basic units varies strongly, the topology of those units remains almost constant under pressure. The O-particles contain from 2 to 14 O and Si-particles have 1 or 2 Si. The clusters of particles (CP) include Si-clusters and O-clusters which occupy micro-regions with pure compositions and contain up to 8 Si and 106 O, respectively. The densification is realized by two ways: (i) increasing density of atoms in shell and core of particles; (ii) increasing number of small O-particles in expense of large ones. The simulation also reveals particles and CP which are stable for long times. Strong chemical bonds between core and shell atoms prevent those particles and CP from breaking apart. During about one nanosecond the solid-like atoms are non-uniformly distributed in the space where they gather instead in rigid Si–O subnets, stable particles and clusters of stable particles. We find that the dynamics heterogeneity observed at low pressure is originated from the small rate of bond-breaking events and non-uniform spatial distribution of these events. 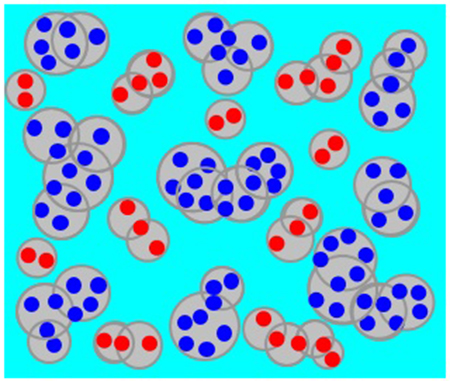